The work of a child is hidden in the form of play. Through innocent and mischievous play, little children understand much about themselves and the simple lives that they lead. However, adults often fail to pause and understand the intent behind these acts and view them as behaviour that need to be reprimanded. Without comprehending why and how the innocent play began, we swoop in and rearrange the child’s play to restore our idea of order.

This story is narrated by a tired mother who recollects her little child’s innocent play and shares with us the events that ensued. Between the lines of this story, there is much left for us learn from the mischief, the innocent 2 year old behind the mischief and the mother who witnessed the mischief!

It was a usual weekday noon. I was busily preparing lunch while Kanaa was occupied in a rather quiet activity. Usually, I have to plead with Kanaa to find something to play on her own but that day seemed easy. She had found something to busy herself with and stayed unusually quiet. Since I was a first time mother, I hadn’t fully realised what it meant when things were quiet in a toddler’s room. I was happy and relieved that I had avoided a power-struggle with my toddler and continued to cook peacefully. It had hardly been minutes since I began feeling a sense of zen when Kanaa came running out with her hands and face WHITE! They were completely covered in layers of thick, winter moisturiser.

My first reactions were speechless! I was absolutely dumbstruck. The tired mom in me began to wonder how much cleaning would have to go into this. This particular winter cream is extremely thick  and used for harsh winters that we experience in Switzerland. The box recommends a very thin layer which stays on and shows clearly. So, you can imagine! But before I could react, I just stopped to notice the pride on the two year old’s face. She was smiling wide and her nose was up in the air feeling ever so proud of what she had achieved. She broke the silence by saying excitedly, “Amma, look I applied cream all by myself. I also applied for Georgie.” Yes indeed, she had perfectly applied moisturiser for herself and her favourite plush toy ‘George’ – curious George, the monkey.

I just began to laugh. I laughed incessantly and grabbed my phone to take a photo before the scene could change. I just wanted to freeze the moment, before the tired mom in me woke up again. This photo still remains precious to our family. I knew at that moment that I should cherish this for it will never happen again. I simply stood there and listened carefully to her endless explanations of how she had achieved her dream goal! 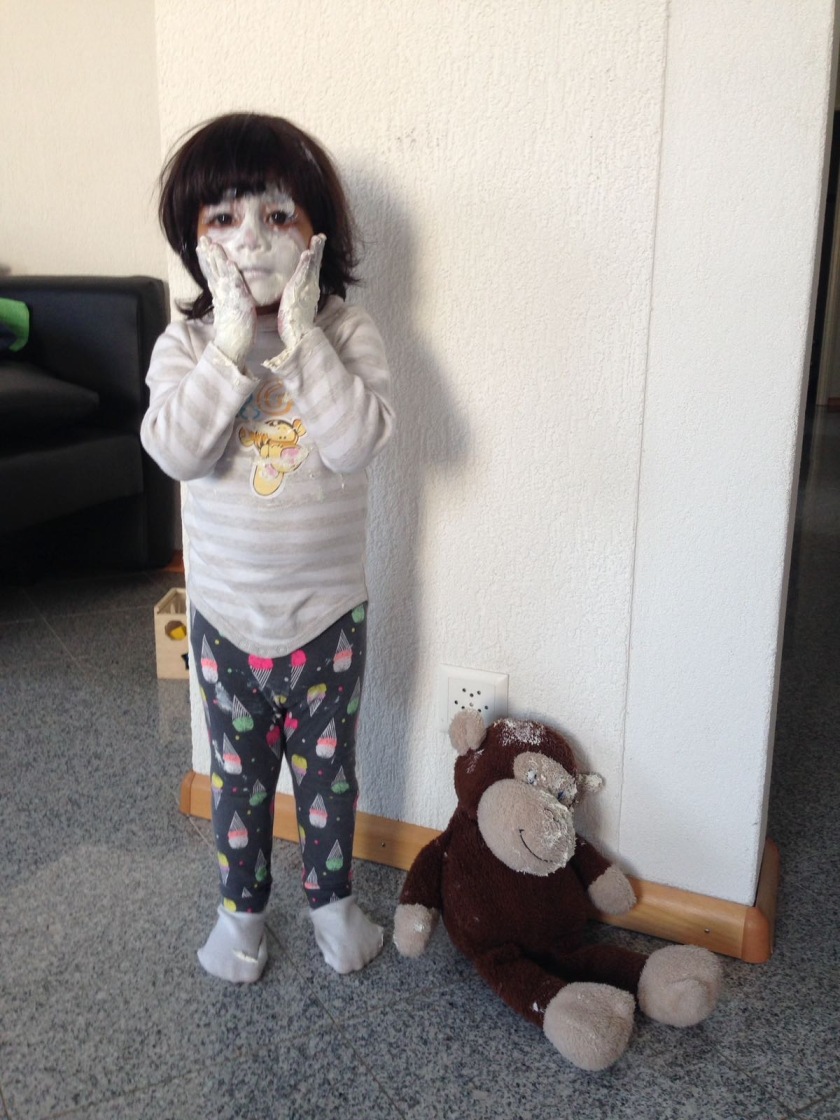 She then took me by my hand and walked me over to her room to show HOW she had achieved this feat. She took me around the room and described the whole process to me. To my surprise, there was hardly any mess at all. Imagine a two year old had opened a box of cream that she could dip her whole hands into! There were no marks or white patches anywhere. The box of cream was open, it was as good as new just a day earlier, but now it was almost over.

She wanted to come clean with me. She pointed out the areas where she had accidentally smeared the cream on while applying for herself and Georgie – the bed sheet, the side table and the mirror. She then narrated a long story of how she had used the roll of tissue, which I usually kept handy in her room because of how it gets with toddlers, to wipe out the messy areas. They were hardly visible since she had wiped them out quite well and neatly collected the used tissues by the side of the bed.

The tired mom in me, which had wanted to giver her a piece of my mind about all the cleaning that I would have to do, had just disappeared. I was thoroughly impressed by ‘the process’. In the photo, on close observation, one might notice how neatly she has applied the cream. She had intended to make no mess. It wasn’t a joke to her. It was serious work. Kanaa’s goal for that afternoon was to impress herself and her Amma by giving her one less thing to do for the day – apply moisturiser by herself! And, IMPRESSED, I was.

Nevertheless, I did spent the next three days giving her thorough showers and soaks in the tub to get the thick layers of winter cream out of her hair and face. As for Georgie, he went into the washer for two full wash cycles.

My little baby is now five years old and applying cream might never impress her, or me, the way it had, three years ago. I’m so happy that both of us could live in that moment and enjoy it. It is so hard as a parent, to choose the right way to react to situations like these. I learnt then to remember to stop, think, re-think and make the choice and then react.

Here is a story of little Akanksha who lives in San Jose with her parents Akshay and Shyama and her younger brother Dhruv. Akanksha turned 6 last month and has been going to public school, or as she calls it “big girl school” for the past year. Her parents sheepishly remark that dear Aaku is quite a bossy little one who thinks it is her responsibility to boss everyone, just like she does with her brother!

Apart from bossing her brother around, little Aaku enjoys playing hide and seek. It started off as an innocent game when, as a toddler, she used to hide herself in the same spot and giggle away even before she was ‘found’. However, these days she has upgraded her games from hide and seek to just hiding and then for hours after that, her desperate parents have to seek her. Aaku’s disappearing acts are definitely not something that Shyama or Akshay or even Dhruv for that matter, look forward to.

Her father recollects a particularly nightmarish incident which happened last August when they experienced one of the hottest summers. The entire family had to regularly treat themselves to some water-play in the evenings when the dryness and heat would reach its peak! Aaku in particular had been complaining of the heat and much to her parents’ dislike, had started sneaking some water balloons indoors on those really hot days. One Saturday evening, in late August, the family had some guests over for the weekend and spent the evening relaxing in their backyard while the kids ran wild playing with water-guns, rolling on the grass and jumping on the hammock together. None of the adults slowed the hyper children down and, in fact, were quite excited that they were exhausting themselves without any help from their end, because they had all made a plan to watch a movie together later that night.

After a lot of screaming, giggling and plenty of water-play, Shyama took both the kids to the bath and after a quick shower and an unexpected second-innings of water-play in the bath, brought the kids for dinner with the family. Dhruv was dozing off at the table and made no fuss to go to sleep, but Aaku, who was overtired, decided to jump on her bed and ask her father to read not one, but three books. Akshay had obliged and finally tucked her in to sleep and joined the group for the much awaited movie-night!

The movie was so gripping that all of them were completely engrossed in it and had not realised how late it had become. After the movie, Shyama decided to check in on the kids while Akshay attended to their guests. As Shyama took a quick peek into the kids’ room, she saw Dhruv sleeping soundly on his bed, but Aaku was missing. Shyama immediately checked the bathroom and also took a look under the bed and on the side, incase she had fallen down, but Aaku was nowhere to be seen. She panicked and immediately came outside and informed Akshay. They checked the kitchen and every other room, including all her favourite hiding spots – behind the blinds, under her parents bed, in the bathtub and even in the pantry, but Aaku was no where to be seen. At this point, Shyama was hysterical and the whole house had been woken up, including a half-asleep Dhruv who separately went to each room shouting “Aakshu akka, Aakshu akka” (akka for big sister)  without understanding fully what all the noise was about. Akshay was ready to call 911 for help, when Shyama suddenly remembered to check in the backyard. And there on the hammock, sleeping quite soundly despite all the noise, was little Aaku. On being woken up and asked why she even came outside the house and if she wasn’t scared, little Aaku cooly replied that her room was too hot!! They realised that their naughty little first born had gone out through the kitchen door into the backyard and since all of them were pretty engrossed in the thrilling movie, they hadn’t noticed.

Well, on one side, the parents were relieved on finding Aaku but reprimanded her and put a little fear into her about coyotes and bats in the dark. However, Akshay wearily says that knowing his daughter, he wouldn’t be surprised if she decides to make another disappearing act. Saying thus, he recollects another traumatising incident back in India, when Aaku had accompanied her grandpa to the vendor selling watermelons and while her grandpa was picking the watermelon, had climbed into a random school bus.  He also mentions another incident when Aaku had gone and hidden herself in a dog’s kennel in their neighbour’s house while the entire family was searching for her. He yawns and says he will reserve those stories for another day!

You matter.
I am not an expert on this topic, far from it... but I want to amplify this as a parent, an educator and an infant mental health supporter.
💫 a way forward.
A conscious step forward 💔
Let’s talk attachments, shall we? 🤍
Loading Comments...
Comment
×